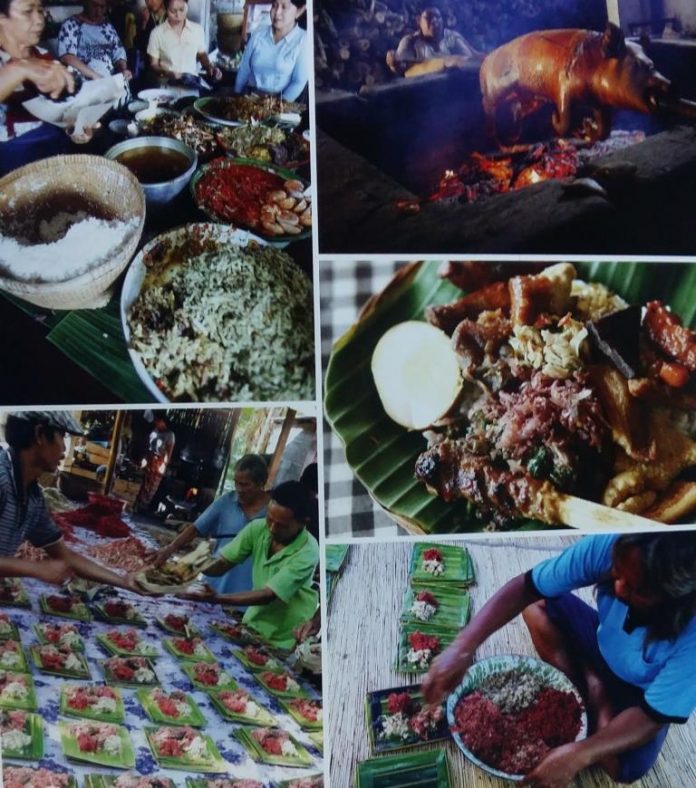 A Wealth of Taste in Traditional Regional Cuisines (2)

The group of island known as Indonesia extend north and south of the equator along a major volcanic belt, to which the Indonesian soil owes its high fertility. The warm, humid climate and heavy rainfall provide ideal conditions for the cultivation of a wide range and variety of fruit and vegetables, including rice.

Indonesia geographic isolation and economic wealth, especially the valuable spices found in the Maluku island group, made the country magnet for merchants and settlers form Portugal and Holland, together with Arabs, Indian, and Chinese; all of whom have influenced the indigenous cultures, religions and eating habits. Consequently each region, over time, adopted these foreign inputs that eventually evolved to become part of each region’s cooking. Indonesians take the infusion of outside elements for granted. These differs from Singapore, for example, where the Baba Peranakan, Mamak, Malay and Indian groups still produce their own cuisines in their home.

Indonesia’s cuisines, especially in the major island, have borrowed ingredients and cooking techniques from varied and numerous sources over the centuries. The Arab and Indian traders introduced their own spices, including the sweet rose essence, together with the couple of popular dishes like the Indian Martabak, a type of pancake common in food stalls. The Spanish and Portuguese traders brought New World produce long before the Dutch came to colonize most of Indonesia.

In western and central Indonesia the main meal is usually cooked in the late morning, and consumed around midday. In many families there is no set meal time when all members are expected to gather. For this reason, most of the dishes are made to last and remain edible for many hours at room temperature. The same dishes are then reheated for the final meal in the evening. Typically one can reheat yesterday’s leftovers for breakfast, for example fried rice, or you can go to a neighborhood warung for a local breakfast takeaway specialty.

Though the mysteries of Balinese rituals, including food offerings, have been well exploited for tourist purposes, the daily food of the Balinese is familiar only to themselves. As practicing Hindus, the Balinese have fewer food taboos than their Moslem neighbors. Beef, however, is not as popular in their simple daily diet. Their religious offering are much more elaborate than their everyday grub.

The Banjar (communal center) is central to maintaining Balinese traditional life. Here, performing religious or ceremonial tasks is more important than attending to a regular job. In preparation for ceremonies or daily meals, food is usually chopped, minced ore shredded. Typical meals include a one-dish offering of rice mixed with shredded meat or vegetables. An example of this would comprise Nasi Campur. The Balinese enjoy the flavor and sensations of a certain consistency given by small piece of shredded meat.

Another popular Balinese specialty is babi guling or crispy spit roasted whole pig, the best of which comes from Gianyar, not too far from Ubud. Every part of the pig is cooked, with some parts becoming condiments to this unique dish.

Lawar (with chopped or shredded meats) or urap (without meat) is a dish of mixed chopped vegetables or leaves with spices or basa genep. The most important condiment accompanying Balinese daily meals is the usual Balinese sambal-chili sauce made by quickly stir-frying minyak jelantah (used oil) and fresh coconut oil, sliced shallots and garlic, fermented prawn paste or blacan, and salt. Lawar typically contains blood. If you prefer lawar without blood, ask for white lawar (lawar putih). 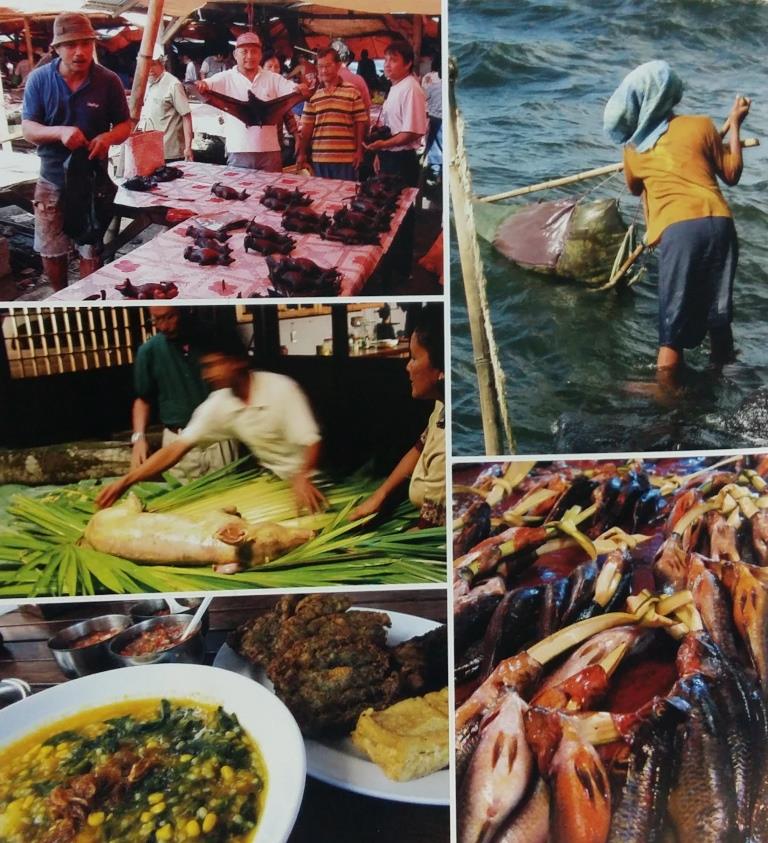 Sulawesi (formerly Celebes) is noted for the fiery foods of its people, the Minahasans. Primarily Christians, they are culturally connected to the people of the nearby Philippine Island of Mindanao. Minahasan food is almost always seasoned with large quantities of ginger, lemongrass, lemon basil, and fresh red chili, an aromatic combination that creates one of the most joyous-tasting cuisines on Southeast Asia.

A signature dish is Ayam Panggang Sulawesi (grilled coconut chicken with lemon basil). In this rich concoction, chicken is cooked in flavorful coconut milk curry before it is grilled, then basted with the thickened curry. Another favorite dish is a slow-simmered curry made of young papaya cloves, coconut milk, chilies, and of course, a liberal handful of ginger and lemongrass.

The people of North Sulawesi eat a great variety of meat; some might say a bizzare variety. Manadonese food is a refined mixture of Minahasan, Sangir Talaud and Chinese cuisines. For the Minahasan people, eating is fun; it is possible to stop by any party and enjoy it, and then walk out with saput or take home food. Its refinement is largely due to Minahasan food being cooked by Chinese Peranakan cooks who infuse a Dutch Portuguese influence. A signature dish is Ikan Bakar Rica Rica (grilled whole fish with aromatic hot chili, shallot, ginger lemon grass kaffir lime leaves and calamansi juice)

The food in North Sulawesi is not keenly sought ny outsiders as it popularly contains dog meat, white tail fruit mouse, wild boar, python and flying fox. Furthermore, the food is extremely spicy hot from the high amounts of chili padi used. For example, cooking may require almost a one-to-one ratio of meat to chili padi, fresh aromatic herb leaves and greens. This is fiery fare however, is mostly found in the  Minahasan indigenous cooking and not in the Manadonese victuals.